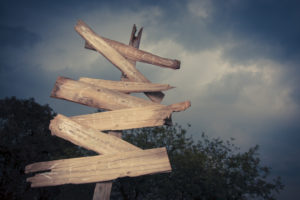 Lots of people said the hardest thing about setting up on my own would be making the decision to leave the day job, that moment of reality when I had to release the vice like grip on the envelope containing my resignation letter.  In fact resigning, when it eventually happened, was a curiously simple process, working my notice felt like the most natural thing in the world and even leaving was not a sad experience.  My time at my old company had been a long and happy one but, like all good things, knowing when one is ready to let go is such an important part of any healthy relationship.

In fact, the hardest part of the process turned out to be establishing a new working identity for myself.  For the six months prior to formally moving into self-employment, I had been describing myself as a coach to anyone I met so it appeared that I was already embracing that part of my journey.  It was a crucial part of my role anyway, plus the establishment of an in-house coaching practice, and some freelance clients outside work had made it feel real.  Isn’t there something in the naming of things that powerfully establishes something as a truth?  I think of this as the verbal equivalent of Amy Cuddy’s Power Poses.

But something strange happened after I left the safety of my lovely team at work, the familiarity of my desk, the office rituals, the daily call and response that so often go hand-in-hand with corporate life.  Those first few weeks, far from being a ceaseless nirvana of freedom and creativity, were actually a testing time.  I was confronted with the question of whether I really believed  what I’d been saying about myself in those months leading up to my departure.  Was I genuinely ready to start redefining what success meant to me or was I still wedded to an employed sense of myself?

What did “employed” actually mean anyway: was it being a “Head of”, part of a team, a manager, a participant, a respondent, or could it mean being someone with the agency to not just identify but establish my own edges?  All the markers of success and failure that I knew were bonded to a professional identity that was, by its nature, part of an organisation.  What happened when the organisation was just me in an office in St Albans?  On the bright side, the obligatory post-holiday Toblerone no longer had to be shared but, without people around me to be in relationship with, could I really say I had a professional identity?

Those first few weeks therefore invited me into an exploration of that sense of untethering; and that ultimately is what coaching is about, an opportunity to explore what Jung described as truth telling.  I had to deal first with my attachment to the story of my professional life that I’d been slowly crafting over nearly two decades, the shorthand of which I could easily point to through those universal markers of Blackberry, business cards, LinkedIn profiles, professional memberships.  But hadn’t I walked away from those things because their story no longer reflected the truth of who I was in a professional or personal sense?

Those weeks offered a gentle confrontation with my readiness, my willingness to excavate that story and step into something new.  It started with considering my language – so confident while still employed, and so easily straying into undermining when I no longer had the perceived protection of an externally applied status.  I flinch to remember my often repeated joke that I was “straddling the line between self- and un-employment” when deep down, in my bones, I knew that I really, truly, completely was a self-employed person.

Although it might have been sensible to do all that thinking while I was preparing to leave my old job, actually I’m not sure it would have been fully possible.  I was still too enmeshed in my identity there.  The thinking began before I left but with many such experiences, without an external helping hand it could not be concluded until I was suddenly adrift and while that has been, and no doubt will continue to be, scary at times, there was also something incredibly liberating about being unattached to anything in particular. It continues to offer an opportunity for fearlessness, a prospect unencumbered by any outside expectation.  Really who can ask for more from their professional lives.

If you would like the opportunity to excavate your own professional story and consider how to construct a new freedom in your working identity, please do get in touch.  It would be a pleasure to explore that with you.